Road Trip: A Pocket Guide for the Death Road to Canada

Given the lack of activity in this subforum, it's probably best that I get this made so it doesn't gather dust any longer:

What the hell is Death Road to Canada, anyways?

Death Road to Canada, as described on TV Tropes, is "a self-described "road trip simulator" - a roguelike, an RPG and Oregon Trail mixed together with zombies, dogs, jerks and otakus."

Your job is to bring a group of Floridians up the East Coast of the United States to get to the mystical, zombie-free land of Canada. Said Floridians are bound to run into all sorts of strange anomalies throughout the trip, ranging from astonishingly sentient dogs to old men delivering some !!spicy rants!! to anime magical girls. That's a strange anomaly called a Rare Character. They can be pretty powerful, but they also tend to have drawbacks to make up for it, such as atrocious personality skills or a tendency to be just as dangerous to the rest of the group as they are to zombies.

Custom characters? So that's why there's a blatant self-insert in the game? You can have up to 80 different custom characters in the game, with any one of them being a version of yourself with a beard you probably don't have, or a tuque balaclava you probably don't own. Regardless of what you lack, there's two things that everybody has in Death Road to Canada: one Perk and one Trait.

Perks are the qualities of a character that are mostly focused around their Fight and Support skills, typically indicating their past occupation such as a Mechanic, Gun Collector, or Megabuff. They start off on Level 1 if they're not locked, but can be upgraded up to Level 3 with enough investment.

Traits are mainly focused around a character's personality or unique abilities. Unlike Perks, Traits can't be upgraded, but they often give the character inherent benefits and flaws, ranging from an inability to feel drowsy to being far more capable in diplomacy and support at the cost of having poor morale for the entire game.

And why did you just bring this up for seemingly no reason?

Because you might just play a part in what will probably be the most autistic screenshot LP to ever grace the internet if it ever sees the light of day! If you want your name tainted by a bunch of screenshots with words describing them, the only thing you'll need to do is announce your lack of shame to the thread and tell me what Perk and Trait you want for your self-insert. Whether you want to be the ultimate punchboy or you want to be a suicidal spess Floridian lesbian, all requests are valid.
Top

The deed is done. Anyone else willing to hop in?
Top

Still, I'll begin a test run so people can see how the game works... and of course, what to expect from the game.

Test Run Part 1A: An Overview on Stats and the Party

Here's a rundown of how this test run will be set up: 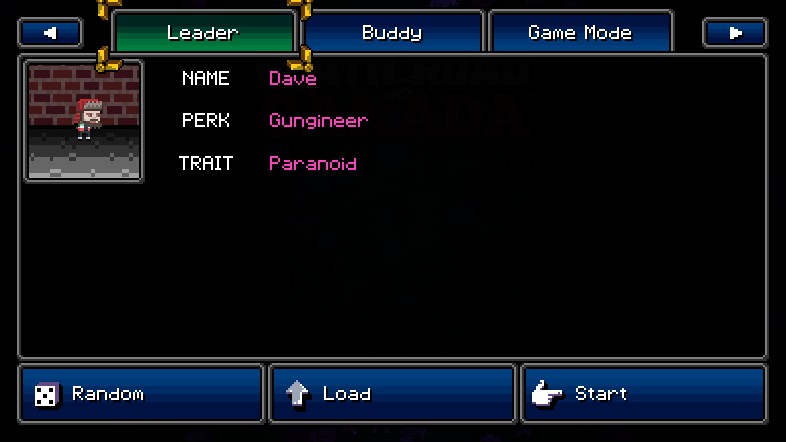 Dave is the leader of the group. He has the Gungineer perk, which has him start off with a crowbar and two additional points in both Shooting and Mechanical. The crowbar is a relatively heavy weapon that doesn't deal too much damage when compared to other weapons, but it does have an advantage - the weapon is, AFAIK, unbreakable. He's also Paranoid, which means that he can see some of the skills of possible recruits and can also get an additional choice in some random events. Even though the trait sounds underwhelming, it can easily be one of the most powerful skills in the game.
Overall, Dave can be a competent mechanic and gunman, though the lack of bonuses to Strength or Fitness would make him pretty bad at melee combat in most cases.
As you may notice from the tabs above, the starting party can contain up to two members - the leader and their buddy. 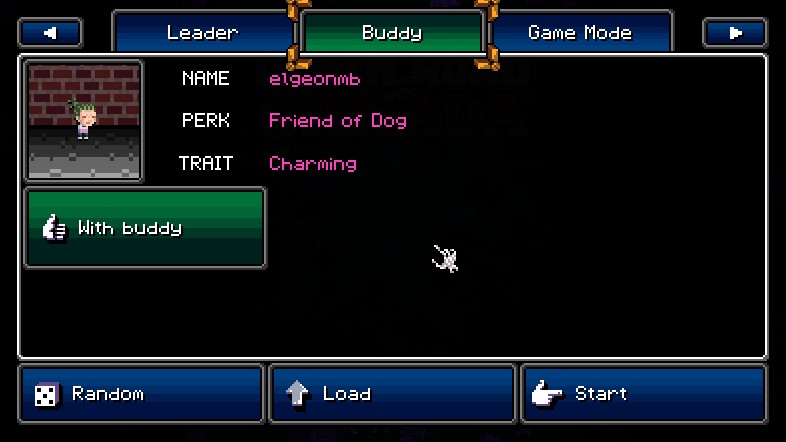 In my intended playthrough of Death Road to Canada, Dave would be starting off his journey by himself while he picks up another shmuck in the Polaris community a familiar friend of his as he drives along the East Coast. However, given that there's only one "familiar friend" right now, elgeonmb will be a buddy of Dave's from the beginning. In addition, I'll be in Death Road Normal Mode for this run. As one would expect, this is the default mode for Death Road to Canada. 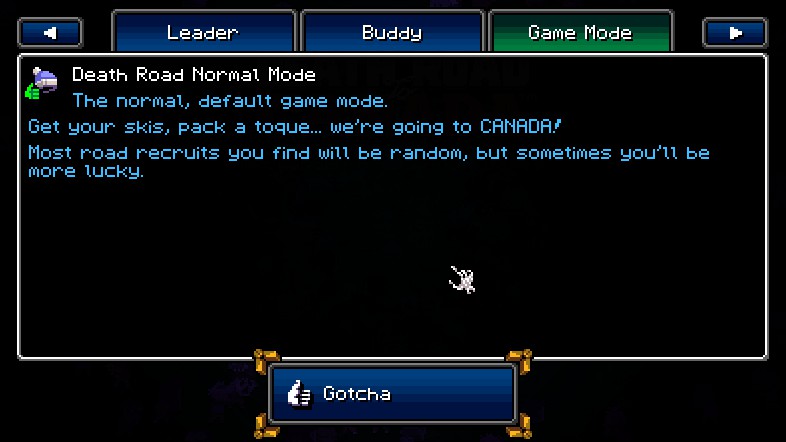 On that note, let's begin the session.

(Accidentally skipped the opening text. What a wonderful way to start off my first screenshot LP.) 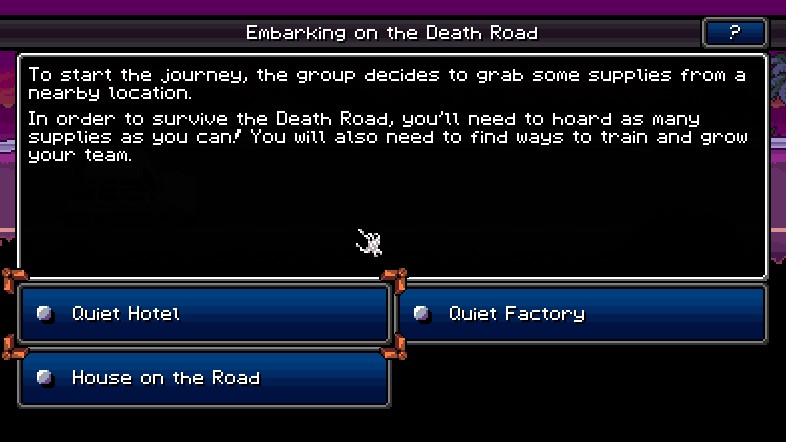 When you begin the trip to Canada, you always get an event where you pick from a selection of three places to loot - as such, this is always your first taste of combat. Overall, all three of our options will be indoor missions, which means that we won't be able to access the trunk of the car, and must make use of what we bring along for the mission. The Quiet Hotel and the House on the Road will have a general quantity of supplies, but the Quiet Factory will likely have viable weapons such as crowbars, wrenches or wooden planks. However, the open interior of the factory will likely mean that there are more zombies around, which none of our party can exactly handle given the lack of competence in melee. As such, I'll loot the Quiet Hotel.

But before that, let's see the stats of our party before we get down to business: The stats in Death Road to Canada are split into three general categories: In general, survivors can start off with roughly 0-1 points in Fight or Support skills (excluding stat bonuses, of course). Their Personality, however, can be much less predictable with some exceptions.

You may notice that Dave's stats are mostly unknown. Don't worry, this is how most survivors' stats often are. However, certain stats may be revealed from the beginning if they have certain traits. In Dave's case, his Wits and Attitude are revealed because he has the Paranoid trait, which automatically sets his Wits to 6 and his Attitude to 0. Given that (in most cases) skills can be between 0 and 6, this is both good and bad. She's exactly as witty as Dave is, but with the exact opposite attitude. The status screen also notes her Friend of Dog perk, which can be useful when it comes to dogs. Unfortunately, her ability to fight is just as unknown, but we know that she's likely as good with guns as she is with CQC due to Dave's additional 2 points in Shooting, even if it doesn't matter with the lack of guns, let alone silent guns. In regards to her choice of weapon, she isn't well off either - the broom doesn't deal much damage and can be expected to break after a while, if not a few hits. However, it is lighter than Dave's crowbar, which would make it a better weapon to use for either of our weaklings.

Now that this post has been going on for quite some time, it's best I do the actual mission in a separate post...
Top Before the mission begins, you can set the party roles and equipment.

The Roles tab allows you to set the roles of your party. Of the three roles that can be selected, you can determine whether a character will LEAD - that is, who you'll be directly playing as - whether they'll FOLLOW, which means that they'll come along for the mission, or whether they'll REST, which has them stay offsite, safe from any danger. If the entire scavenging party gets killed, you can still continue if there's a valid character who was resting, even if you'll be heavily affected by the loss of potentially-useful party members.

For this, I'll have elgeonmb REST while Dave LEADS. In most cases, this will be quite disadvantageous given that Dave is quite useful with his Paranoid trait, but he should be fine if he goes by himself, especially given that this will allow him to bring both his crowbar in addition to elgeonmb's broom, giving him room for one more weapon to loot during the mission - if the broom somehow doesn't break, that is. You may also notice that there's two flashlights in the inventory, and you may think that the poor number of weapons isn't an issue. Unfortunately, they aren't necessarily intended to be viable weapons, for their main purpose is to allow you to see properly at night. Typically, you'll just have them lying around in your set of weapons, for you'll get light even if you're not holding them out. 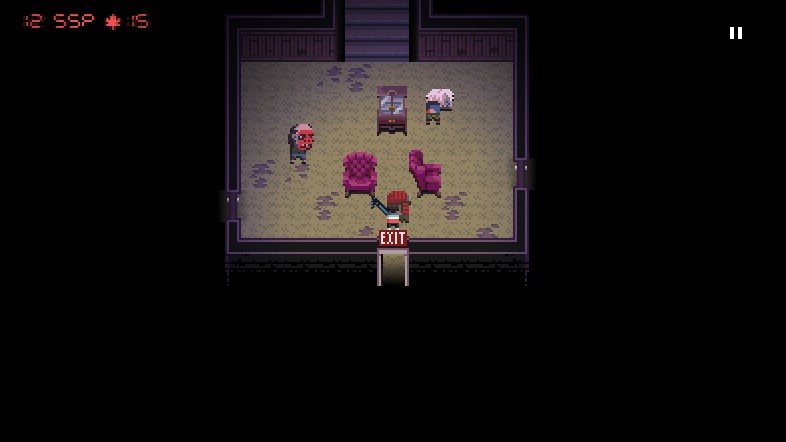 There's only a few zombies, but even then it proves to be quite a hassle for Dave, who initially tries to attack the zombies with his crowbar. It proves to be far more damaging than the broom, but he gets quite tired out from only a few swings. 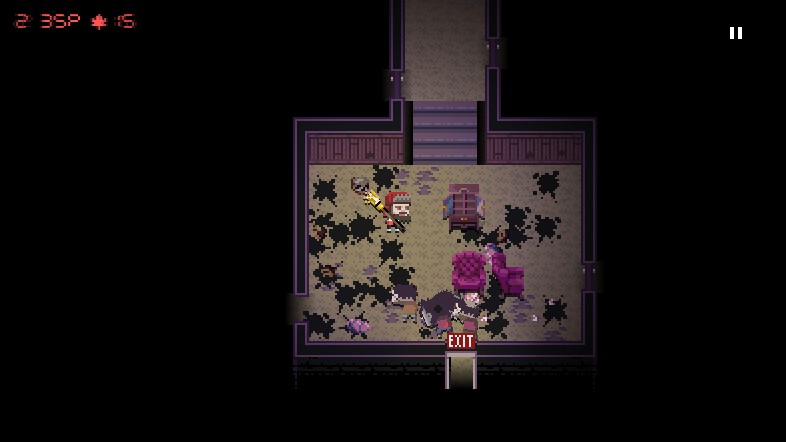 The broom, when used against the horde of zombies that came in uninvited, proves to be easier to use for Dave, even if the damage is meager. Fortunately, the broom doesn't manage to break on him mid-fight. 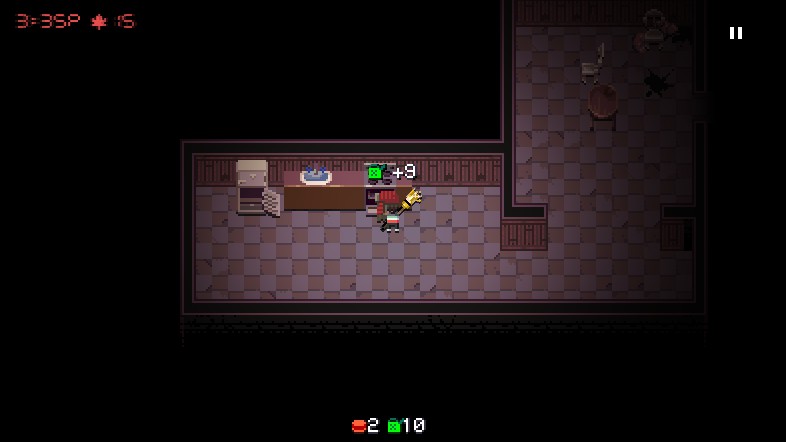 Once the zombies are handled, he goes down the door on the left to find a kitchen, grabbing a bit of food and also some fuel in the stove - and a surprising amount, too.

Moving on to another part of the hotel, he runs into a special weapon of note: 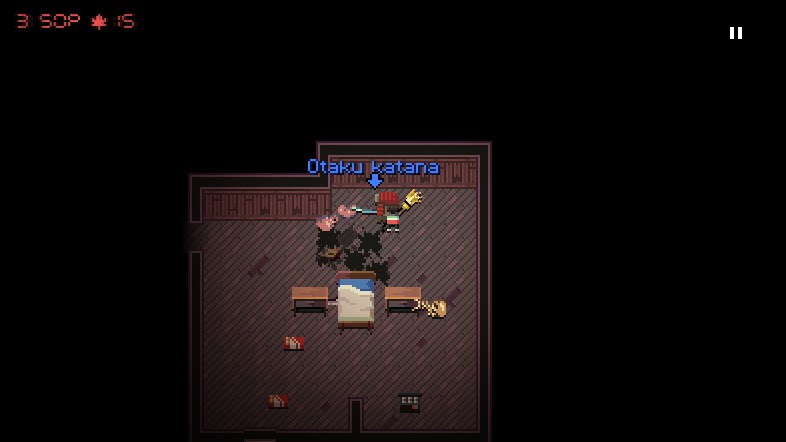 The Otaku Katana, despite what you may think, is honestly a pretty shitty weapon: while it does deal quite a bit of damage while requiring little energy to use, this is counteracted by it's prime disadvantage: it is very fragile, and doesn't last very long until it breaks. However, it's few advantages are sufficient enough to make it a useful weapon for now until Dave gets his hands on much better weapons. 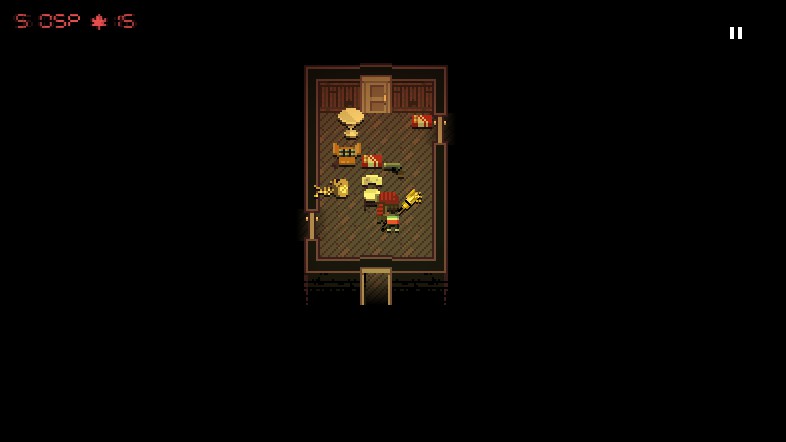 Speaking of which, Dave finally manages to find a pistol in a room nearby, thus allowing him to put his shooting experience to work.

Pistols are, as you'd expect, not very powerful in regards to its zombie-killing power, but finding ammo for it is quite easy, and it can carry up to 90 bullets as well. Given that Dave is already using all three of his weapon slots, he decides to ditch the broom to make room for his pistol. 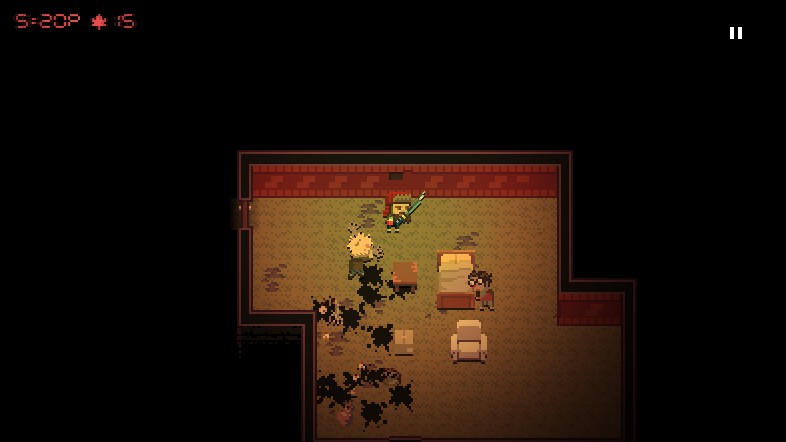 Of course, given the noise that it would make when fired, Dave decides to use the otaku katana for a bit before he started moving his way towards the exit. Surprisingly enough, it didn't break at all while he was using it. However, noticing a bigger horde of zombies in front of the exit, he decided to break out his pistol and open fire with the tons of ammo he looted. It caused the horde to get bigger than it initially was, but all were handled with only a bit of hassle. Once the horde was eliminated, Dave decided that he got enough loot out of the mission to get back to the car. Now that the first part ended, I have to admit that this is going far slower than normal, given that we've still got fifteen in-game days to go and we're only done with the first mission... it might be better to show off the game with a stream at this rate.

Return to “Other Games”